Review: Guardians of the Galaxy

This review will be twofold, as will most of my reviews be in the future. I will first talk about the film itself as a whole. This is what will interest most of you. The second section of this critique will discuss the visual aesthetic and technical implementation of the film's visual effects and cinematography. Feel free to skip past the section if you have no interest in that sort of thing. 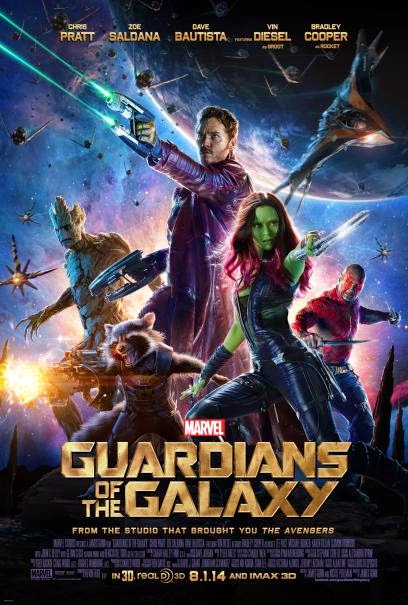 I must say I was quite pleased with this film. It is almost the perfect summer popcorn flick. It was well written and well acted. The visual effects were extremely well executed. When I first started seeing promos for this at the beginning of the year, I was guardedly excited about what looked to be a very good summer action movie. While I am an old comic book buff, I was not terribly familiar with this particular comic series. For those of you who do not know, the Guardians of the Galaxy is one of the more obscure Marvel comics. Its characters were occasional guest stars in both the Avengers and Ironman. I cannot comment on how close the movie was to the comics. They are not a series I ever read and I made it a point not to read them so that I could judge the movie on its own merits. People are always saying that the book or comic book is better than the movie, but I feel that this is often the case because people will bring preconceived notions to the theater instead of walking in with a clean slate, and judging the story presented on its own merits. I did not want to do that on this film.

The movie started off with a sadly beautiful vignette which told the main character's (Starlord) origin story without saying too much, but still getting a feel for what kind of person the character would become. From that point on the story became a wild crazy ride perfect pacing. This movie is like a roller coaster, once you've been introduced to the main character, it sends you right into the story at breakneck speed. Make no mistake, this movie is a thrill ride.

The actors, both CG and real-life were both compelling and convincing. Considering two of the main roles were generated entirely with CG, this brings what is already a very well acted movie to a whole new level of artistry. You have to keep in mind any time one of the physical actors is interacting with either Groot or Rocket Raccoon, they are acting at a spot on a green screen studio. The character animators did their work well. The animated characters and their voice actors worked together seamlessly. This was a very physical movie. There were easily as much or more physical special effects as there were computer-generated effects. The stuntmen should be applauded for job well done.

I think what surprised me most about this movie was how much it made me laugh. It was peppered with lots of jokes and snarky ribs at popular culture. The best one most people will miss because they won't stay through the closing credits. I think it is quite appropriate that there was a nod to the worst comic book adaptation in what I feel is one of the best comic book adaptations ever made. I don't make this comment lightly. So stick around for the end of the credits. The gag is well worth it.

One last thing about this movie... The soundtrack is the phenomenal. All the tunes throughout the movie are supposed to be from a tape called "Awesome Mix."  I have to agree it is a very awesome mix. It is definitely worth picking up if you don't already have the songs in your MP3 collection. 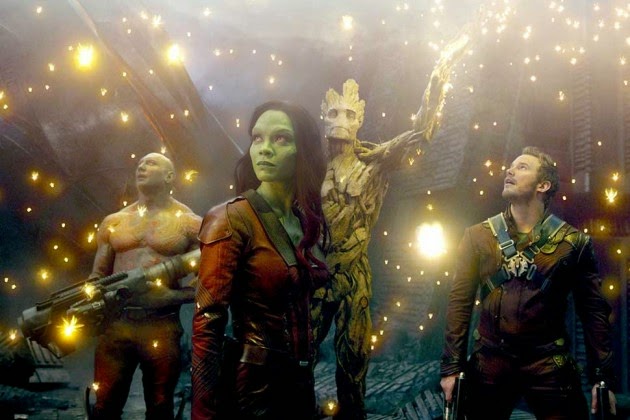 On a more technical critique of this movie's visual effects, I have to say this movie is nearly flawless. It did not make the mistake that so many movies with high amounts of CG effects make. It was dirty. Often computer-generated effects look perfect, to perfect. You just did not see that very often in this film. The few exceptions to this were that occasionally Groot's leaves were just slightly plasticky. It did not happen in all his scenes, but it did happen often enough that I noticed in the first viewing. Granted, I was watching this on an IMAX screen, but I was also watching it in 3-D which will by its very nature make things slightly fuzzy and hide too perfectly rendered elements. However, this was only in a few scenes and a fairly minor gripe. For the most part, the shaders and lighting had a very gritty, imperfect feel which communicated a sense of realism to what were quite fantastic elements in this movie. This grittiness is very important to create the high level of suspension of disbelief that a space opera requires.

The effects created by particle simulations were near-perfect and often quite beautiful. The use of shallow depth of field with several of the particle simulations greatly enhanced the sense of reality. The scene that most immediately comes to mind is when Groot released a cloud of glowing elements from his body. That scene simply would not have worked nearly as well without they creative use of depth of field. The only real flaw I saw in any of the effects created by particle simulations were the multi-ship shield generators that were being used towards the end of the movie. Even now flaw would not likely be visible to the average moviegoer. After you spent nine years sticking your nose in particle simulations it is hard not to see a default noise system being used. Yet again, this is a minor gripe. There truly is no such thing as a movie with completely flawlessly implemented visual effects, however, this movie came real damn close.

I also would like to comment on the character animation of both Groot and Rocket.  As I stated before, the digital characters and the voice actors mashed flawlessly. The standard movement animations and facial animations looked lifelike, well it's lifelike as any walking tree or upright talking raccoon is likely to look. The secondary animations on Groot, whether it be growing branches or flowers, added a great deal of depth to a character that really only had one true line.  A special shout out should go to the hair animators who took care of Rocket's fur. Seeing a talking raccoon waking up with bed fur had me absolutely in stitches.

Finally, I would like to talk about how well this film translated to three dimensions. I am a huge fan of stereography. I have dabbled in 3-D photography for most of my career. I have a very good eye for both good and bad 3-D images. The IMAX 3-D version of this was nearly flawless, at least on a technical standpoint. If you are sitting in the center of the theater, you will see almost no 3-D artifacts. This is very rare. I saw avatar in 3-D a few years ago and found that the IMAX 3-D was not nearly as good as the 3-D at regular theaters. Also, both of those gave me eyestrain and the IMAX version gave me a migraine. I am one of those lucky people was quite prone to migraines. If you're 3-D is badly implemented, at the very least I'm going to get a headache by the end of the film. This is the first two hour or longer movie that I have sat down and watched that has left me with not a single bit of eyestrain. Whatever you're doing IMAX, keep up the good work.

The only negative comment I have about the 3d has nothing to do with how the stereography has been implemented, but with film aesthetic itself. In both photography and movie anesthetic, we use depth of field to both communicate depth and to direct the viewer to our chosen focal point. Unfortunately, the extreme shallow depth of field used in movies for certain scenes just is not translate as well to a 3-D film as it does a 2-D film. The main reason for this is the human eye has a greater depth of field than most camera optics. We certainly can switch focuses much quicker than any camera on the market. Also, the focal length of the human eye is much shorter than most lenses used in creating photographs and motion pictures, allowing for greater depth of field. Bokay, while being very important for communication in a 2-D medium, can sometimes be distracting in the 3-D medium. That isn't to say that the cinematographers haven't created a visually magnificent piece, it is simply optimized for the 2-D medium aesthetically.  The only true solution to this would literally be to shoot for two different movies: to use a shallower depth of field for the scenes for the 2-D cut and a somewhat deeper depth of field for the 3-D version. However, this would make film production much more expensive. It might be interesting to see somebody shoot a film just for 3-D with these considerations towards depth of field.

I give this movie a rating of 9.7 G's out of 10. Don't miss out on catching this movie this weekend. You don't want your buddies spoiling it for you in the break room on Monday.

I bet you're asking yourself, “What qualifies this guy to critique movies.” My best qualification is that I love movies. I have been a movie buff my entire life. While I enjoy just about every movie genera, my personal favorites are science fiction, fantasy, and action films. However, I have other qualifications besides just being a movie buff. I spent nine years studying 3-D animation and visual effects at the Savannah College of Art and Design and the University of Illinois. During that time, I learned how to critique not only my own work, but also the work of my peers and colleagues. I spent many hours watching and analyzing movies, not only for their plots and acting, but also to critique their visual effects, both digital and physical. I also spent most of my spare time through college learning the art of photography. As it turned out, the art of the lens turned out to be my true vocation. However, I still love movies and plan on talking about on a semi-regular basis. What's the point of having a soapbox if you don't actually use it.
at 2:13 PM 1 comment: